Posted on September 9, 2018 by Wilfried Elmenreich

The Institute of Networked and Embedded Systems at the University of Klagenfurt, Austria, has three openings for researchers (PhD student) on the topics of
– software engineering of swarm systems
– system testing and fault diagnosis
– embedded communication protocols.

Candidates are expected to have a master in electrical or computer engineering, computer science, applied mathematics or equivalent. Experience (by study or work experience) in two or more of the following fields is required:

You will work at the Smart Grids group at the Institute of Networked and Embedded Systems under the supervision of Professor Wilfried Elmenreich. The institute cooperates with national and international partners from industry and academia and is part of the research cluster Lakeside Labs (self-organizing networked systems).

Our team is very international and dedicated to quality research and teaching. Our working language is english. The offices and laboratories are located in the well-equipped Lakeside Science & Technology Park. The Institute cooperates with national and international partners in research and industry. It is part of the research cluster Lakeside Labs on self-organizing networked systems. The PhD will be embedded within research projects in collaboration with local companies and will enable the candidate to gain also professional experience.

The contract will be based on a gross salary of at least 39124 EUR per year for 40 hours per week. Please mail applications containing a letter of interest, curriculum vitae, copies of academic certificates and courses, list of publications, a PDF of your master thesis and contact details of two references in a single PDF file to wilfried.elmenreich@aau.at . Women are especially encouraged to apply.

The setup and verification of time-triggered communication systems are very tedious. Detailed process time information like the Worst Case Execution Time (WCET) must be gathered beforehand to determine the slot sizes such that no slot violations occur. For highly dynamical systems like prototypes, the investigation of the WCETs and thus the setup is very costly. Here, mostly the code is modified which influences the process execution time.

In this paper, we present two mechanisms, which provide additional information about the time-triggered bus communication state during run-time. The gathered information is used to identify tight slot boundaries which simplifies the setup and verification of such a system.

As a prerequisite, we assume that the predefined schedule is imprecise due to missing process time information. Therefore, our first mechanism is applied to detect slot violations. At the beginning of each slot, the participants check if the previous message already arrived. If this is not the case, a slot violation occurred and the current task’s execution is delayed until the expected message is received. With this, message collisions are prevented and the entire communication system is kept alive.

The second mechanism is applied to gather detailed information during run-time which is used to rate various slot specific qualities. Thereby, the bus communication is analyzed by tracking the message reception times. The gathered data is compared to the known slot boundaries and the quality ratings are determined. As a result, the additional information enables an implicit verification of the communication state which can further be used for an extended node control.

We claim, that the gathered information will reduce the effort to set up and verify a time-triggered bus communication in highly flexible systems. The feasibility and performance of the presented mechanisms are currently investigated and will be presented in a follow-up paper.

Posted on December 18, 2016 by Wilfried Elmenreich

Kapton is a polyimide film wich can withstand a wide range of possible temperatures from -269°C to 350°C. Therefore, it is an optimal material to cover the printing bed of a 3D printer. You might have seen the thin yellow foil on some 3D printing beds before. Kapton can be bought as a tape or foil, both come with a sticky side, ready to be put onto the glass surface of your printers pad. However, when applying the Kapton tape or foil to a glas surface, you often end up with bubbles – at least it happens to me. Since the sticky sides sticks very well, it is almost impossible to get rid of the bubbles, which defies the purpose of having a nice smooth surface for your prints.

The best way to apply a Kapton foil without bubbles is the “Wet method”. By applying a thin layer of detergent and water onto the glass surface, the Kapton tape sticks a bit less in the beginning, which allows you to remove any bubbles that may form on the adhesive side with a ruler. I made a video of showing the overall procedure.

Thanks to Sriram for the camera work! You can spot him at the end of the video.

Programming the Arduino Pro from a PC

Posted on December 6, 2016 by Wilfried Elmenreich

I admit, programming the Arduino Pro from a PC is no rocket science, however it is always useful to have a tutorial at hand that shows the steps how it is done. Therefore, I would like to share the experiences we had with programming an Arduino Pro Mini as part of our Swarm Robot “VIPL” [1].

On the printed circuit board we added a connector for serial programming to the Arduino with the following wiring scheme:

The programmer has a USB connector and maps itself as a COM port. It plays nicely with the Arduino Studio, you just have to set the correct COM-port in the tools settingh of your Arduino Studio: 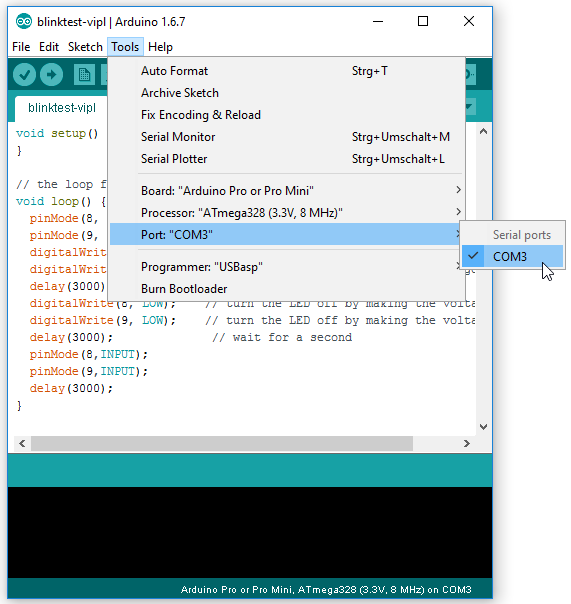 The picture also shows the other settings for the Arduino type and microcontroller and the programmer type, here “USBasp” works fine for me. 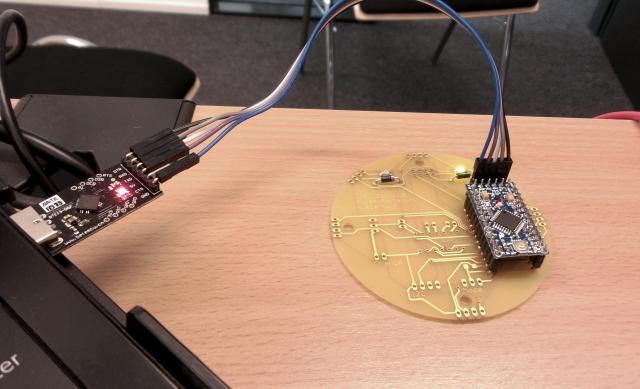 Some search showed there is no consensus how to assign colors to the wires depending on the signal. In this picture we used the following colors:

Feel free to use any other colors, but keep the same connections 😉

That’s it, now we can start to program our Arduino. Note that while it is connected as shown in the picture above it will be powered via USB.

Posted on November 14, 2016 by Wilfried Elmenreich

As part of this year’s European Robotics Week, ROBOTICS is hosting a 48h Gam Jam on the premises of the Lakeside Science and Technology Park in Klagenfurt from 23 to 25 November 2016 on “Rehabilitation Robotics – Development of a Serious Game with the Integration of a Robot!”
This is an excellent meeting point for committed students from different disciplines that want to work together on future technologies.

What is a Game Jam?
A game jam is a collaboration of game developers to jointly plan, design and develop a game within a short period of time. In the process, people from different disciplines such as programmers, game designers, artists etc. work together.

PARTICIPATION
Limited places, so please register at robotics-office@joanneum.at
The participation is free – food and drinks will be provided!

Posted on July 6, 2016 by Wilfried Elmenreich

What I liked was the compact format, the whole simulator fits into less than 20 well-structured Java classes, while implementing a simulator with different timing modes, a graphical display and an event-based underlying simulation engine.

For this reason, I still use JProwler in a lecture on network simulation as an example how a simulator could be implemented from scratch. Unfortunately, a student recently told me that the offificial download for JPROWLER is gone, therefore I provide the code, which is under a free software license here for download:

See also this paper from the authors of PROWLER and JPROWLER explaining the concepts:

and this work showing what can be done with JPROWLER:

Posted on November 11, 2014 by Wilfried Elmenreich

By building robots from the Make Club webpage one can learn the skills to design and construct own robots. Definitely worth a visit!